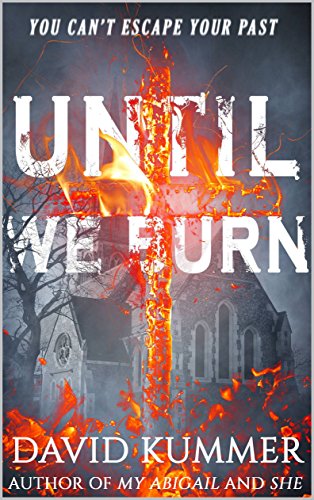 Cyrus Street returns to the town where he grew up. He returns to try to solve a mystery that had ruined his life.

15 years previously, the church in the town had burned down, killing, amongst many others, Cyrus’s young son. The fire had been arson, and he wants to find out who did it.

Helped by a young man from the town, he sets about trying to find clues as to the perpetrator of the crime. This becomes more important as murders begin to take place in the town, seemingly of people who were witnesses. Cyrus’s probing has worried someone.

David Kummer is a very talented young author. I found I couldn’t put the book down once I’d started it. He manages to grip the author and carry them along with him. It is a dark story, described as ‘psychological horror’, and I would go along with that description.

David Kummer has an insight into character unusual for one so young. His characters are real, and have both flaws and virtues. We find ourselves sympathising readily with them.

The ending is surprising. I thought I’d guessed the perpetrator, but I was wrong.

If I have a fault to find, it’s that at the end, we know who, but not why. There are also a couple of places in the book I was unsure about what had happened, but this did not spoil my overall enjoyment.

This is a young man to watch.

I gave it 4 stars on Amazon

Feel free to share my posts with your friends and followers. If you do, please refer back to this blog.