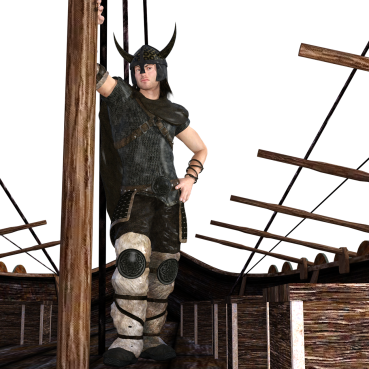 This story is set in Britain, in what is now Yorkshire at the time of the Danes and tells of the trials and tribulations of Helgha. This is a saga told by a scald (the Danish equivalent of a bard.) It tells of how Erik won Helgha from her father.

“Erik loved the beauteous maiden, Helgha,
The most beautiful maid
Amongst all the Danes.
Her flaxen hair flowed like moonlight on the seas
And her blue eyes glowed like the sky in summer.
But they could not marry.
For Erik was promised to another.
He visited his love often
Until her father challenged him
To a battle.
Sword rang on shield.
Axe split the air with sound like thunder.
Young and strong, was Erik,
Older and wily was Biorn.
Who would win?
Youth and strength or
Guile and Experience?
Biorn struck first with his axe,
But Erik raised his shield.
Biorn’s axe glanced off.
Erik fought bravely
Until Biorn’s shield broke.
Biorn hit Erik with the edge and drew first blood.
Brave Erik did not flinch.
Blood streamed from the gash in his cheek
But he fought on, ignoring pain and blood.
The battle continued for hours.
Erik parried the axe with his shield.
His sword longing for blood.
His eyes burning with the pleasure of the fight.
Then Erik saw Biorn tiring
The man’s steps became slow,
His axe dragged
As if reluctant to hit this brave young warrior.
Erik backed into a barn wall and feigned a slip.
When Biorn came with raised axe
To finish the battle and send Erik to Valhalla,
The young warrior rolled beneath the axe
And as Biorn raised his weapon,
Erik sent his sword upwards.
Into the heart of his foe it went.
Blood flowed over both.
As Biorn crashed down, Erik rolled away.
Helgha screamed.
Her lover and her father both drenched in blood.
Who lived and who died?
Then Erik rose and seized the maiden.
He fled to Stjarna, his horse,
And leaped to her back with Helgha.
They galloped all night
Until at dawn they arrived in Jorvik.
Now Erik has a beautiful bed-slave.
And a scar on his cheek
To remind all of his bravery.”

The book is undergoing the editing process at the moment. I’ll keep you all informed as to how it’s getting on. Nearly through the first rewrite.

Feel free to share my posts with your friends and followers. If you do, please refer back to this blog.