Here is something about my books. Click on the book image to go to Amazon in your country to purchase.

The Wolves of Vimar Series

All Carthinal wants is admission to the ranks of the mages. Travelling from Bluehaven to Hambara, where his rite of passage is to take place, he doesn’t expect to end up on a quest to find the long-lost sword of the legendary King Sauvern.

With strangers he meets on his journey, Carthinal sets out on the seemingly impossible quest. Followed by Randa, the snooty aristocratic daughter of the Duke of Hambara, and the young runaway thief Thad, Carthinal and his companions face tragedy and danger.

Watched by the gods and an implacable foe, they will have to accept help from the least likely sources and face their innermost fears. As the fate of their world hangs in the balance, they realize that this is more than an adventure. This quest will change them all. 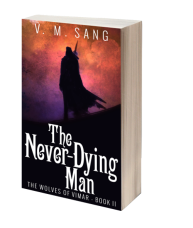 After finding Sauvern’s Sword, the companions set off to help a friend rescue his child from kidnappers. Instead, they stray into Erian and find preparations for war. They are drafted into the Erian army but are recognized by an old enemy, who arrests some of them and takes them to Frelli, the capital of Erian, where they are put in jail.

The Master of Erian frees them and offers them work. Meanwhile, Carthinal has to face some unpleasant truths about himself. Is his desire to further his magical career more important than his friends and country? After they discover terrible truths about the Master and his magical research, they will need to escape in order to tell the leaders of Grosmer about the plans for war.

The group called Wolf have been enlisted into the Erian Army against their will, and they soon learn that an invasion is planned into their homeland of Grosmer.

As the heroes make their escape, they accidentally stumble upon an old Dwarven city, and become friends with them.

Facing enemies on all sides, the five must find where their loyalties lie, and save their homeland from certain destruction.

After the Crown Prince of Ponderia starts behaving strangely, his best friend Pettic discovers that the prince has been replaced by a doppelganger, and the real prince kidnapped.

Unable to accept the loss of his friend, Prince Torren, nor the cruel impostor to become the new king, Pettic sets on a quest to rescue his friend. After he sees the fake prince meet a mysterious man, Pettic discovers that the prince has been imprisoned in another plane of existence.

With the help of Blundo, the court magician, Pettic finds out that the only way to enter this another world are four keys, each of them associated with a different element. As Pettic sets on his seemingly impossible quest, he discovers that the four lands that hold the keys are all vastly different… and more dangerous than he could have ever imagined.

After his return from Aeris with the gem of air, Pettic receives a letter from the king. He is to see Torren and rekindle their relationship.

Soon after, Torren and Pettic meet a strange man and their lives change drastically, as they’re dragged into a mystery surrounding the red dragon Monarlisk and his former mate.

But will Pettic’s magic be enough to help them finish their quest in time – and in the end, will the rightful king be crowned?

Adelbehrt and his sister, Avelina, are taken by the Romans from their home in the Rhinelands when they are very young children. When they are sold as slaves and taken to distant Britannia, Adelbehrt vows that one day he will escape and take revenge on the Romans. But escape is not so easy. Nor is taking on the might of Rome. How can Adelbehrt achieve his desire to exact revenge on the Roman army? And will he be destroyed by his hatred?

The next book in this series, which follows Adelbehrt’s descendants through the ages, will be available later next year. It takes the family into the Viking Era of Britain.

This recipe book is the culmination of many years of cooking and baking by the author. She is passionate about food quality and believes that home cooked is best.

She has inherited a recipe book from her mother’s eldest sister and a small one from her grandmother that contains recipes from the turn of the 19th century. She has also included many recipes from other family and friends from many places and times.

It is an interesting look at how our diets have changed over the years as well as our cooking methods. Many of the older recipes are done by long steaming. There are also some interesting ‘Hints and Tips’ from long ago.