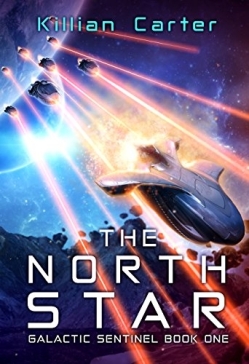 The version I read of this book had loads of errors. Spelling, grammar, syntax, you name it. I therefore was intending to give it a low rating because of it. However, I have been assured that it was published in error, and a new version has been released. As I haven’t seen this version, I cannot give the book the full 5 stars, but have only deleted one.

Synopsis
Clio is a cadet on a starship carrying secret ‘super-troops’ called Aegis to a laboratory Colony 115. Commander Grimshaw is in command of this operation .

When the starship sights a strange ship never before seen, and it attacks, they crash-land on Colony 115 only to find an invasion by strange creatures going on.

The crew has been scattered all over the planet, and they need to come together to leave. But Clio is the only pilot left alive. They must fight these aliens in order to get to the starship in the laboratories.

Characters.
The characters are believable. They all have their good and bad points. Clio has a violent temper, but also a softer side which is shown by her care for a sentient creature she befriends.

Commander Grimshaw has his anxieties, too. He must do what he can to ensure they leave the planet to tell the rest of the galaxy of these aliens.

Then there’s Randai. He’s a dropout on Sentinel. It is obvious he was once more than he is now, but he has drowned himself in drugs and alcohol, as well as getting involved with criminals.

I thought the characterisation very good.

Plot.
An excellent and original plot. It is exciting and moves rapidly.
The jumps from one character to another were done well. Making you want to continue reading to find out what happened to the ones you’ve just left.

Writing.
Aside from the errors, the writing moved the plot along, and kept you reading. The author set the various scenes well, and the reader can imagine the places and visualise the characters.

Summary,
I have deducted one star, due to the fact that I’ve not seen the latest version of this book, otherwise it would have got a resounding 5 stars. It kept me on the edge of my seat while reading, and I am looking forward to reading book 2.

From tomorrow, 19th August, The Wolf Pack will be free on Amazon until 23rd. Just log in to http://mybook.to/TheWolfPack for your copy.
Whle you’re there, why not buy books 2 and 3, The Never-Dying Man http://mybook.to/NeverDying and Wolf Moon, http://mybook.to/WolfMoonVM
Little does Carthinal know that the journey to Hambara for him to take his mage tests will lead to a great adventure and the making of new friends.
But when he is asked to go to find a long-lost artifact, he and five others set off on the quest. This group is made up of a very disparate bunch of people who need to learn to get on with each other before they can complete the task. There is the threat of fireworks erupting between them due to their different characters.
The quest leads then through many dangers and their lives are threatened in many ways. Each of them needs to face their own personal fears, and none of them returns unchanged.

Today and tomorrow, The Stones of Fire and Water, book 2 of Elemental Worlds by V.M.Sang is free. 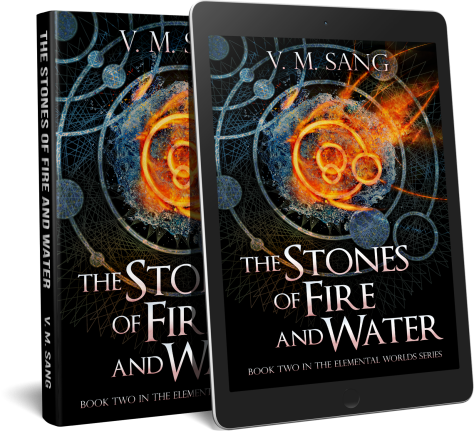 Don’t miss this opportunity. Click on the book cover to buy.

Here is a bit about it.

After his return from Aeris with the gem of air, Pettic receives a letter from the king. He is to see Torren and rekindle their relationship.

Soon after, Torren and Pettic meet a strange man and their lives change drastically, as they’re dragged into a mystery surrounding the red dragon Monarlisk and his former mate.

But will Pettic’s magic be enough to help them finish their quest in time – and in the end, will the rightful king be crowned?

If you haven’t read Book 1, The Stones of Earth and Air, you can buy it by clicking on the title., or go to My Books page.

Don’t miss this amazing opportunity. Hurry before the offer ends on 25th June. Click on the links now.

If you do buy and read either or both of these books, please will you give a review. Reviews are important to both authors and readers. If you have ever chosen a book (or other product) based on a review, you will realise this. It needn’t be long. Just a few stars and why you liked or did not like the book.

And if you want to remember pi to6 decimal places, here’s a mnemonic to help.

How I wish I could calculate pi.

I am quite excited about this release because I started reading the series recently and am looking forward to reading the rest of it.

Debbie has kindly interviewed Miri for my blog. Here is the interview.

What do you miss most from when you were young?
Oh lots of things: my cats – Kitty and Susie; my best friend – Jenny; New York City and in particular the Lower East Side where I grew up; and most of all my omama. I think about her every day – the things she taught me, the stories she told. And I also wonder about the stories she didn’t tell. About her early life in Vienna and how she escaped from the Nazis. Maybe one day I’ll be able to piece all that together.

What scares you the most?
That I could lose my new friends here at P.A.W.S. I’d like to be able to just enjoy my classes and hang out like a normal teen (or at least as normal as a shapeshifter cat girl can be), but bad stuff seems to follow me around, so I guess I should be prepared.

How did you change as you grew older?
I think I’ve become more confident and a little less likely to trip over my own two feet – I think having four paws helps with that and of course having good teachers – Josh and Danny – also does wonders.

What has been the hardest struggle for you?
Believing that I actually have magic. I know Jessamyn says that my whole family had magic, but it does seem hard to believe.

Who do you hope stays in your life?
Well Danny of course (blushes), but I don’t really see how he likes me. And then I hope I’ll always stay close to my friends at P.A.W.S. – Josh, Sandy, Sean and Joey. Joey’s said that in a few years I should visit him in Australia. That would be a lot of fun.

What do you need to be happy in the future?
Good friends, my books and my writing. I hope someday to write my story and delve into my family’s past so that I can write a history of that too.

What is the most important lesson you have learned?
To trust my friends when they say I’m much stronger and more capable than I think I am.

Pick up your copy today!
And connect with Debbie on her blog – Paws 4 Thought
Facebook or Twitter.

This is the fifth Tuesday in the month and so I will be digressing a bit. I think I want to be a bit controversial. Not too much though, and I risk sounding my age, but here goes.

Today, on the radio, I heard something about a group of young people in Cornwall who want to make music. They have been practising in a garage. I assume it’s the garage of one of their parents. Needless to say, there have been complaints about the noise.

The council has told them to cut the noise level. Now in the discussion on the radio the following was said (predictably). ‘There is nowhere for the young people to go and nothing for them to do.’ (This is probably not a direct quote, but that was the essence of it.)

Firstly, why do people think that something should be provided for them? What’s wrong with sorting something out for themselves?

Secondly, this has been the cry for donkey’s years. I heard it when my own children were growing up. It is often an excuse for the bad behaviour of the said young people. I dispute this. 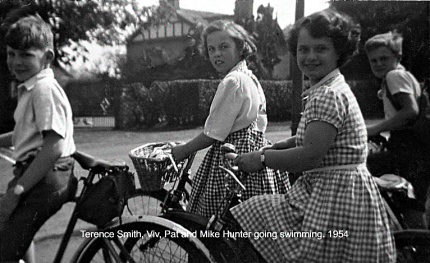 When I was growing up in the 50s and 60s, we had a youth club to go to once a week on a Friday evening. That was IT. Nothing else. We had to find our own entertainment. What did we do? Well, I remember going for bike rides at the weekend and in the school holidays. I expect someone will say that it was different then. The roads are too busy now, but there were no dedicated cycle ways made from old railway lines then. We had to ride on the road.

We also went round to each others’ homes and played records (as they were then). We went into the woods and built camps. We went for walks in the countryside. OK. All young people don’t have access to the countryside, but they have parks. We walked the dog too. Where I live, I rarely see a young person out with the family dog. It’s always the parents.

My own children did many of these things, and my son was in a band too. They rehearsed in our house or the garage of one of his friends. My daughter went to youth club, like me, once a week, and my son was in the scouts. He went camping with them. These things still exist.

So why the constant moaning about ‘nothing to do?’ I argue that there is more for the youngsters nowadays than in the past, and middle class parents seem to think that they must provide something for their kids every day, taking them here there and everywhere–swimming, riding, judo, dancing, etc etc.

The result of this is that youngsters today don’t know how to entertain themselves and can’t cope with boredom. As I said to my own granddaughter the other day,  ‘There’s nothing wrong with being bored.’ It’s from boredom that ideas spring. If we are constantly entertained, we have no time to think for ourselves and to come up with new innovations.

Thank you for putting up with this little rant. Please leave a comment as to what you think.