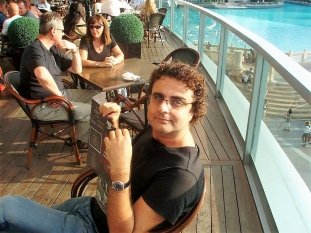 Sean, whom I featured last week, has kindly provided me with a couple of extracts from his book, Crimson Deathbringer. I hope you enjoy them

Sean tells me that Max is a car, just in case you become confused.

We returned home at around two AM. I was tipsy, and with Liz pressing up against me and kissing my neck, I didn’t realize we’d arrived until Max said, “Jim, we’re in front of your home.”
I owned a one-story Colonial house in Nassau County. Nothing too fancy, but not too shabby either. I got out of the car and walked through my small garden with its wintering rose bushes that looked like wooden candelabras to the front door with Liz holding my arm. I said, “Cordelia, I’m home.”
A soft, feminine voice said, “Welcome home, Jim.”
The door of my house opened. We entered the living room, laughing and kissing each other. Then, a faint smell of expensive cologne hit my nostrils, and I found a tall, blond man sitting on my favorite sofa. He had piercing gray eyes and a completely unfashionable goatee, and he was wearing a long black trench coat. There were not one, but two freaking lethal-looking machine pistols next to him on the coffee table.
There were a few small blood stains on his shirt, my sofa and the floor.
Liz let out a tiny shriek. I put my arm around her shoulder and said, “Don’t worry. Everything’s fine.”
“Hi, Jim. It’s been a while. Merry Christmas,” said the man.
My heartbeat hadn’t returned to normal, but pretending that it was an ordinary visit, I answered with an air of nonchalance, “Hi, Kurt. So nice of you to drop by. Just a few days ago I thought splashing some blood on my sofa would give it that gritty, rebel look.”
Yep. Kurt von der Hagen, the legendary freedom-fighter, tyranny-battling rebel, ruthless terrorist, deadly super-assassin, and number one on every security agency’s most-wanted list was sitting right there in the middle of my freaking living room. Right when I was about to propose. King Kong wrench, thrown.
Liz looked at me with wide eyes. “Why’re you two talking like you know each other?”
“Sweetheart, meet Kurt, whom I’m sure you recognize from all the wanted-dead-or-dead posters,” I answered. “Newsflash: He’s my best friend. We’ve known each other since we were in elementary school. Kurt, this is my girlfriend, Elizabeth.”
Kurt stood up, grimacing with pain and clutching his side, and in perfect Spanish—which I could mostly understand but couldn’t speak—said, “It’s a pleasure meeting you, Elizabeth. May I say you look absolutely stunning.”
Liz looked lost for words, but one didn’t become an acrobatic pilot/stunt woman without fast reactions and the ability to think under pressure. “Charmed, I’m sure”—she said in English—”but in case you haven’t noticed, you’re bleeding all over our furniture. Let’s patch you up, and then you can tell me what Public Enemy Number One’s doing in our living room.”
I snorted. “Public Enemy Number One? Huh! John Dillinger ain’t got nothing on Kurt. Mr. Super Assassin eats the likes of him for breakfast.”
“With all these movie references, I confess half of the time I have no idea what Jim’s talking about,” Kurt said, “but I can already tell the two of you are perfect for each other.”
Liz asked, “You’re ‘best friends’ with someone who doesn’t watch movies?”
“It’s a very long story,” I said.
Liz had some medical training and had dealt with many wounds and injuries in her career. She went to our bedroom to bring her bag of medical tools.
“Cordelia?” I said.
“Yes, Jim?”
“What’s going on outside?”
“Nothing much. All quiet,” she said.
“Did anyone follow Kurt?”
“Not so far as I can see, and you know I can see a lot.”
“Full lockdown mode,” I said.
Half-inch steel sheets covered all my housed windows and doors. The only way someone could enter now was using explosives.
“This won’t stop SCTU, you know,” said Kurt.
“True. But Cordelia can see them coming, and it’ll give us more time to figure out what to do,” I said.
Liz came back to the living room. Kurt took off his trench coat. I got my shoulder under his arm and helped him walk to our dining table and lie on it. Liz slashed Kurt’s shirt with a pair of scissors. She unwrapped the piece of cloth around Kurt’s waist and examined the bullet wound on his side. I tried to look over her shoulder.
“Give me some room,” she told me. A couple of minutes later she added, “It isn’t bad, but you’re losing too much blood. Hold still.”
She debrided the wound and started patching Kurt up.
“Before I forget, Cordelia?” I said. “Aren’t you supposed to inform me if an armed man tries to enter my house?”
She asked with concern in her voice, “Jim, are you all right? Have you had brain trauma recently? Do want me to call a doctor?”
Much like her owner, Cordelia was a wise-ass. Liz couldn’t stifle a laugh.
Kurt flinched. “Don’t make me laugh. It hurts too much.”
Cordelia continued, “This is Kurt, your oldest friend. He’s been in this house 523 times already. The last time he was here he was covered in blood and heavily armed too, and he was accompanied by Allen, who was carrying a grenade launcher.”
Liz laughed. “What? No bazooka?”

The crimson space fighter and its wingmen attacked Invincible, laser cannons blazing. Maada’s vessel dived at high speed, pulled its nose up at the last moment, and did a firing run close to the starship, hitting her repeatedly from bow to stern. The gray space fighters followed it, raining deadly laser bolts on the Akaki ship. Energy bolt after energy bolt tore into her, scoring devastating hits. As soon as the Xortaag vessels veered off, a massive ball of multihued fire engulfed Invincible, and in a flash, she blew up into millions of minute glowing shards shimmering in dark space.
Five thousand sailors, vaporized. Just like that.
And Varina.
The thought of his daughter made Tarq feel his hearts were about to give out. His only child, who could not wait to grow up, was dead. Varina, who loved his pranks, and who never got tired of listening to the stories of how her father had saved the galaxy multiple times, was gone, and it was Tarq’s fault.
The command ship was under attack. Someone shouted, “Brace for impact!” The vessel shook violently. Tarq did not pay any attention. He stared at what was left of Varina’s ship, and overwhelming grief cut through him like a thousand sharp knives. Trying to use physical pain to block his mental anguish, he grabbed his two front antennae and pulled them so hard the agony made his vision blur. That worked. For a brief second.
His PDD beeped. It was a video message from Varina. With terror in her eyes, she said, “Father, we did our best,” and the message cut into static.
His daughter’s last thought before being murdered by the Xortaags was how she had disappointed him.
The thought made his gut churn. He twisted his antennae as hard as he could. The severe pain pushed him to the brink of losing conscientiousness.

Here is a link to the Sean’s Amazon Author Page.